Dick Gregory On The Assassination Of Malcolm X 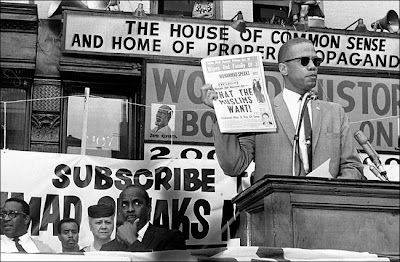 “I was not surprised at all by Malcolm’s murder. I knew it had been planned down to his last breath and that once planned nothing was going to stop the killers. The press gave me the same lie they would feed to the American public for the next thirty-four years. I disagreed then, and I still disagree. I knew that day U got the news that Malcolm’s assassination was a government hit. Even after Malcolm was shot, they had their men in place to make sure he was dead. The man who gave Malcolm mouth-to-mouth resuscitation was an undercover cop. When we finally got a copy of Malcolm’s autopsy report, it showed air bubbles in his lungs. It is fatal to give a person mouth to mouth when they have chest wounds, because you pull air bubbles into the lungs. Strangely enough, Malcolm’s autopsy report showed the same cause of death as Lee Harvey Oswald’s, showing gunshot wounds to the chest and air bubbles in the lung. Another key piece of evidence from Malcolm’s autopsy report clearly showed that the bullets in his body were fired from above him, yet the men who allegedly shot Malcolm were standing in the audience below him. So the brothers that the government paid to kill Malcolm were given blanks and they didn’t even know it. The government didn’t trust that they would do the job, so they had agents in the ceiling of that building to take care of him themselves. Under the Freedom of Information Act, we now know that the CIA rented the Audubon ballroom the week before Malcolm was murdered. Now people must ask themselves why would the CIA rent the Audubon Ballroom and what did they do while they were there? I know what they did and one day the world will know the truth.” -From, “Callus On My Soul” By: Dick Gregory
Posted by Elsie Law at 12:05 PM