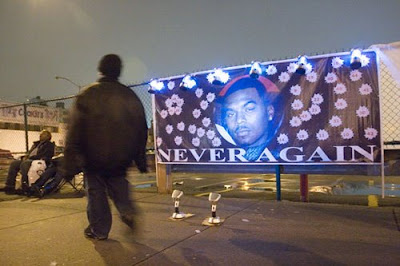 In an attempt to obtain valuable statistics that would document the trend of police shooting an inordinate number of Black and Hispanic New York City residents, the City Council's Public Safety Committee hit a "blue-brick wall." Although The Freedom of Information Act, gives anyone the right to peruse any documentation that the NYPD would have compiled on such a serious life-and-death issue, police officials have found a cheeky and insulting way of refusing to provide this type of data.

According to the Village Voice, Deputy Chief John Gerrish's explanation for the shoddy statistics was as follows: "Providing statistics on the age, race, and gender of each officer involved in a shooting as well as for the people who were shot is a waste of the NYPD's time and resources; because no meaningful conclusions may be drawn from such information."

The implications of such a statement coupled with the NYPD meticulously keeping records on what breed of dog was confronted with NYPD bullets, sends a clear message that maybe these people are more qualified to be on dog patrol than they are to "protect & serve" human beings.

CLICK HERE for the full Village Voice article.
Posted by Elsie Law at 8:48 AM

Labels: Police Terrorism, Protect and Serve...Who?, This Is No Way To Run A City