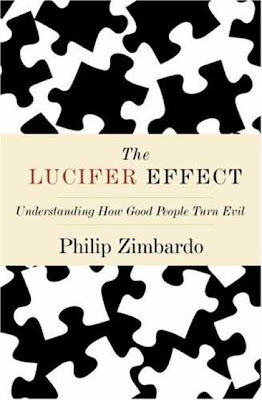 I keep hearing people discussing the spiritual & psychological war that people feel that we are engaged in. This book touches on that topic in a variety of ways. The following excerpt discusses 10 ways that people can be lured into complying with situations that they know are wrong. [Sidebar: In Part 1, I listed the first 5. In Part 2, I list the last 5.] Knowledge is power. To be forewarned is to be forearmed.

"...6) Starting the path toward the ultimate evil act with a small, seemingly insignificant first step, the easy 'foot in the door' that swings open subsequent greater compliance pressures, and leads down a slippery slope. This is also the operative principle in turning good kids into drug addicts, with that first little hit or sniff.

7) Having successively increasing steps on the pathway that are gradual, so that they are hardly noticeably different from one's most recent prior action. 'Just a little bit more.'

8) Gradually changing the nature of the authority figure from initially 'just' and reasonable to 'unjust' and demanding, even irrational. This tactic elicits initial compliance and later confusion, since we expect consistency from authorities and friends. Not acknowledging that this transformation has occurred leads to mindless obedience (and it is part of many 'date rape' scenarios and a reason why abused women stay with their abusing spouses).

9) Making the 'exit costs' high and making the process of exiting difficult by allowing verbal dissent (which makes people feel better about themselves) while insisting on behavioral compliance.

10) Offering an ideology, or a big lie, to justify the use of any means to achieve the seemingly desirable, essential goal. In social psychology experiments, this tactic is known as the 'cover story' because it is a cover-up for the procedures that follow, which might be challenged because they do not make sense on their own. The real-world equivalent is known as an 'ideology.' Most nations rely on an ideology, typically, 'threats to national security,' before going to war or to suppress dissident political opposition. When citizens fear that their national security is being threatened, they become willing to surrender their basic freedoms to a government that offers them that exchange. Erich Fromm's classic analysis in 'Escape From Freedom' made us aware of this trade-off, which Hitler and other dictators have long used to gain and maintain power: namely, the claim that they will be able to provide security in exchange for citizens giving up their freedoms, which will give them the ability to control things better.

Such procedures are utilized in varied influence situations where those in authority want others to do their bidding but know that few would engage in the 'end game' without first being properly prepared psychologically to do the 'unthinkable.' In the future, when you are in a compromising position where your compliance is at stake, thinking back to these stepping-stones to mindless obedience may enable you to step back and not go all the way down the path- their path. A good way to avoid crimes of obedience is to assert one's personal authority and always take full responsibility for one's actions." -From, "The Lucifer Effect: Understanding How Good People Turn Evil" By: Philip Zimbardo
Posted by Elsie Law at 11:38 AM

Labels: Book Excerpt Of The Week